skip to main | skip to sidebar

Early in season 4 of Lost, Miles Strom went into a black woman's house to chat up a ghost. On the stairway wall was a picture of a young black boy -- many speculared it was the young Mr. Eko. But it wasn't. I asked him.
Yesterday my wife and I were at a grocery store in Mira Loma, California, and I saw this kid who looked so familiar. I knew I knew him from somewhere. Maybe a former student or something? But then -- WHAM! -- it hit me. This was the young Mr. Eko! Or at least he looked exactly like him.
Now I am overly sensitive when it comes to any kind of racist claim, so the last thing I wanted to do was approach him and ask "hey, you're young Eko, huh?" cuz of the whole you-must-think-all-black-people-look-alike thing. But my wife was smarter and generally less concerned about that sort of thing than I am, so she walked up to him and asked him, "excuse me, have you been on TV?
He smiled shyly and said yes.
"Were you on Lost?"
"Yes."
And we spoke to him for a few minutes. Nice kid. His name is Kola (officially Kolawole Obileye, Jr. ). He just bought a new house near the area and came to the store to get a can opener. He is very busy with school -- only did Lost as a fun little thing to do -- doesn't really even follow the show much. When I told him that we hoped to see him again on the show, he smiled and said "I'm dead now." But with Lost, you never know.
Checkmate, young Mr. Eko. 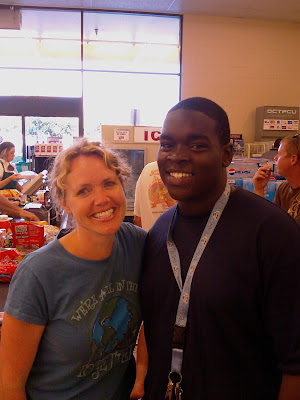 Of course Tracey wanted to tell everyone "we met a movie star, guess who it was?" But me, being the wet blanket stick-in-the-mud "details and accuracy matter" kind of guy that I am argued, "well, he hasn't been in any movies, and he's really not a star -- just two episodes of our favorite TV show, that's it."

But no. That's not how things work around here. He's a movie star. And now, apparently, we are best friends with him, too.

Nice to meet you Kola. Good luck with the rest of your career! (I'm sure we'll be in touch).

Posted by Glenn Ostlund at 2:28 AM

Glenn Ostlund
I have neither red hair nor am I a zombie. Mostly.