skip to main | skip to sidebar

So I was thinking about writing a new post on my walk in to work today. Tokyo is an interesting place. It is busy, people everywhere. But there is also a remarkable sense of solitude. Maybe it's because I am so obviously a foriegner here. Or maybe it's my breath. 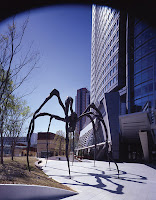 My apartment is pretty much under the "e" where you see the "Roppongi Hills Residence" in this picture of Tokyo, and I walk through Roppongi Hills and past the Mori tower every day on my commute to and from work.
There is a big spider statue in a courtyard at the mori tower. Thousands of people walk by it every day. I'm one of them. One of the fattest.
So I was walking today and thinking "what can I blog?" I was thinking about how Roppongi has a reputation as a "red light" district, and I was going to play off that -- play stupid, like I didn't know what it meant, and say something about how there are also yellow lights, green lights, white lights, and blue lights, although I've never seen a K-Mart. But then I decided that was stupid, and I wouldn't say it. 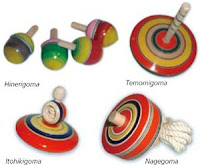 Then I thought about talking about some of the traditional children's folk-toys still popular in Japan -- like the wooden multi-colored tops that kids play with. I was going to build it up by talking about how fun they are to spin and you can pretty much play with them anywhere. I was going to say that people pretty much carry them around with them wherever they go, except for some places in Roppongi where they are not allowed -- some bars that open up at night that are strictly top-less bars. But then I realized that was stupid, too.
So basically the only thing I have left to blog about from my walk into work this morning is a scene I saw while I was crossing a street just before the subway entrance. This is a typically narrow Japanese backstreet -- I can cross it in three or four long strides, and yet it doubles as a two-way street. And there is a streetlight. And a crosswalk. And the crosswalk light was red, which even in Japan means "don't walk." And yet the Japanese commuters were all crossing anyway. Why not? There was no traffic whatsoever, and it is such a narrow road in the first place.

Except for one guy, with his briefcase and his dark suit. He stood at the corner, waiting for the light to turn green, watching all of the people around him crossing the street anyway. And I thought to myself, "what is going through that guy's head?" Here is a guy who obviously believes in following the rules, no matter what. What does he think about the people who aren't stopping like they are supposed to? Is he silently judging them? Is he silently patting himself on the back for being such a law-abiding guy? He stood there for 3 minutes. Why?

Oh well. Another day in the life in Tokyo.
Posted by Glenn Ostlund at 8:36 AM

I like the musings and the silly puns too-- I enjoyed seeing where you live in that mass of city-- how different from what I know about!

Thanks for that-- it gives me a bit more perspective

Soooooooo you never said if you crossed the street or not? I too have been in that situation many times... only usually EVERYONE is waiting at the crosswalk and I am SOOOO tempted to cross the street. But since I usually have kids with me, I DON'T! And for peer pressure reasons, I don't want to give the natives one more reason to think that americans are just awful... you know?

Oh and I laughed outloud that wrote that you are the "fattest" person walking around town... not true.... but you may be the tallest? :)

And I am glad you thought twice about blogging about dumb things in Roppongi... hmmmm. You are nuts.

Glenn Ostlund
I have neither red hair nor am I a zombie. Mostly.